What does the future hold for professional drivers?

People have an inherent need to get around. Ever since we human beings first arrived on this planet, we have had the desire to explore our surroundings. Even when we began to settle down, claiming land and building cities, we still wanted to leave those cities from time to time to pursue new ventures. A vehicle, now more than ever, is a tool with which we are able to access that freedom.

One of the ways in which driving has become such an essential part of everyday life is in helping people to earn their daily bread by turning driving into a career. Drivers come in many styles, whether they’re driving a taxi or steering a bus. Of course, we also require teachers who are experienced in the art of driving to explain to us just how to master this magical skill.

Technology On the Rise: Automated Driving

Recently, certain advances in technology have been made which have increased the need for driving as a profession. For instance, one such company – Uber, a controversial private driving service – has been taking the heat for letting unqualified folks become taxi drivers, a practice that has disrupted the overall driving industry.

However, the C.E.O. of Uber has revealed his overall intention, which is to create a fleet of cars for services such as taxis, professional movers, and other transport services, that actually do not require drivers at the helm.

This is where innovation turns the corner.  With the use of automated vehicles, drivers are no longer a necessity, and that technology is right at our doorstep. The long debated Driverless Car from Google is entering its next test phase this year (2015) via real city driving tests. Scania, a leading truck manufacturer from Sweden is also involved, testing swarm driving of their trucks without drivers present.

The Ripple Effect of Driver-less Technology 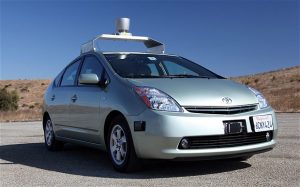 Without the need for people in the driver’s seat, an entire sector could be wiped away (i.e. employees of driving schools.) This is not limited to just the instructor either, since administrative clerks also will no longer be necessary if the operation goes out of business entirely.

Public servants, such as the police force or even traffic court judges, would also be affected by driver-less technology, as their jobs would be rendered unnecessary – unless, of course, driver-less technology is programmed to allow for traffic infringements, but there would probably be no need, since the cars will be quite literally driving themselves and can be programmed to do the right thing.

Even manufacturers could be negatively impacted by driverless technology.  If we choose to evolve to a system of fully automated driving, then even car parts become obsolete, which will also affect the jobs of those that create these parts. Parts such as mirrors and gear boxes will become a part of history once the computer takes over.

Also, increased automated driving means less accidents, which means that there is also a decreased need for new car parts, as well as for the mechanics who would handle these repairs. These folks would also ultimately be out of a job.

Automated Driving: Do We Want It?

When it comes to automated driving, the choice is ours. Although we have talked a lot about the negative impacts this technology could have, it also comes with some decent benefits.  For instance, having this kind of technology on the road could save lives, even if there are occasional glitches in the system.  If two cars collide due to a glitch, there are no people driving or riding in these cars who could otherwise get hurt. Furthermore, there is a potential increase in our overall productivity (no more traffic jams!), as well as how the environment could benefit from cleaner cars, are also things to appreciate.

The main question you need to ask yourself is: do you enjoy the act of driving enough to promote a hybrid ‘manual and automatic driving’ system or would you prefer a computer just took care of everything for you?

What If We Want Automated Driving?

Although many hurdles still stand in the way of automated driving, we can choose to remove them if we wish. However, some questions still need answering:

Don’t be sad that the article is over! We got plenty of other exciting stuff to share with you. Subscribe to our bi-monthly newsletter and we’ll keep you up to date with our latest news!