Ever since 3D printers were invented, we have seen many new ways in which this technology can improve our lives. We have even managed to print pizza, so printing a nice and cosy home in which to enjoy our pizza seems like the next logical step. So far, several companies have managed to print whole houses or house segments using different materials. Their results are far from modest and we might be looking at the rise of an entirely new era of architecture.

Whenever this topic is discussed, the first question in everyone’s mind is, “Aren’t 3D printers incredibly slow?” Well, the printers have advanced a lot over the years and the latest models have truly remarkable speeds.

The Chinese company WinSun, recently showed that their 3D printers can build ten complete houses in just one day. These 10 by 6.6 metre houses were constructed using one giant 3D printer and minimal human workforce. In the the future, it may be possible for a single machine to make entire neighbourhoods pop up overnight.

From Standalone One-Story Structures to Skyscrapers

So far, the 3D printing technology has been used to build mostly one to two storey structures, but no one is setting the bar there. Eastern China already has a six storey building made with the use of a 3D printer and, if we work out a way to introduce new materials into the printing process, building a skyscraper with a 3D printer may become a reality.

One of the best selling points of 3D printed housing is their environmental friendliness. The Chinese used industrial rubble as their main building material, while the Dutch opted for a reusable oil-based material. Printing houses might save us from producing tons of debris. The materials used for printing are also easier to transport than regular construction materials and this can be regarded as both an ecological and economic advantage.

The most shocking part about the WinSun houses is that their buildings cost about $5000 each. Their low price makes them a possible solution to housing problems worldwide. Other 3D printers which are used to build houses can also provide a price that is far below the standard construction price. Further development of this technology can provide a roof for everyone without a shelter in the world. 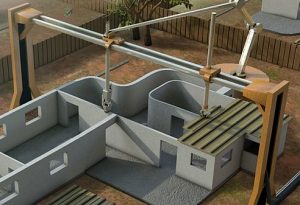 Houses made out of Mud and Wool

3D printer demonstrations have shown that even mud and wool can be used to make a shelter. The Italian 3D printer company, WASP Project, demonstrated that easily found resources such as mud and fibre can provide shelters in the impoverished regions. Their six metre high, three-armed printer can be assembled in just two hours and can print out an almost complete house. Machines of this type can be used to rapidly deploy a refugee camp or to create shelters in disaster struck regions.

Another technique that might provide fast deployment in the future is stacking. A 3D printer can produce large pieces that stack together like LEGO’s. This might not seem that safe, but with the right locking mechanism the structural integrity will not be compromised.

Adding armature in the prints is one of the main game changers that can make this technology a serious competitor in the construction industry. With armature in the mix, architects can create larger gravity-defying structures without worrying that they might collapse. In addition, armature will also make the structures safer and more durable in extreme situations such as earthquakes.

As this technology advances, we may be looking at a time when everyone will become a designer of their own home. An intelligent 3D modelling software can make designing a house as easy as starting a new game in Sims. This futuristic software platform may also offer an option to purchase or import house plans and even improve them by adding your own creative touch.

So far, we have proved that building a house with a 3D printer is possible and that it can be done for a very low price. There are many limitations as to what we may construct, but if we are looking to shelter the homeless it is a viable option. Further development of this technology may provide us with ways to construct larger homes at an even lower price.