Technology Based Taxation – A way to pay for the future?

We are entering the era of robots. They come in all forms and sizes, some humanoid, others not. One thing is for sure: they are here to stay. The impact of this evolution can hardly be overestimated as it touches us in many dimensions.

This article highlights the economic impact of robots that enter the workforce and more specifically looks for an answer to a question that few people dare to ask: how can we pay for our social protection models if an ever increasing number of people lose their jobs to a robot and cannot find a decent job.

You may be sceptical about the rise of the robots in a professional context.  You’ll find an abundance of examples which show that jobs can be replaced by technology. However, most importantly there is a very strong business case to be made in favour of “robo-labour”.

For starters, putting on our accounting glasses, robots are assets while people are costs, something which from a financial perspective makes a huge difference. This means it is much easier to finance a robot via a bank loan as this actual robot can be used as collateral in case a loan cannot be repaid.

More importantly though robots come with distinct advantages that reduces both costs and makes management a lot easier. Let’s take a look of the main benefits: 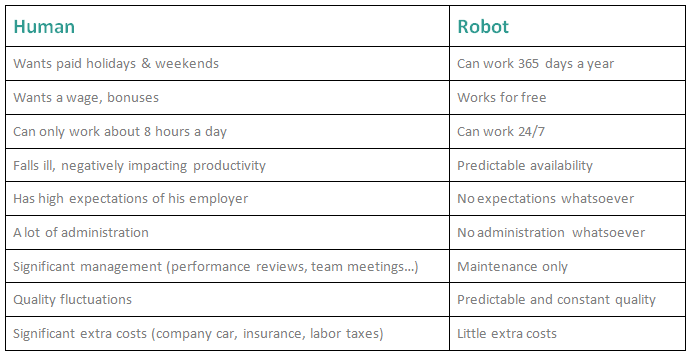 A real capitalist only looks at profit maximisation. Which one of the two options would you prefer in your organisation, provided money and profit was your main driver? Robots 9 – Humans 0…

What does an economy of robots mean?

Let’s assume we evolve to an increasingly automated economy with fewer people required to keep the economy running. Add up a further explosion of people (estimated to grow to 10 billion in a few decades).

Clearly, this will pressure countries’ budgets to keep paying for unemployment benefits to a point where it is likely to become unsustainable, especially in Europe, a continent that prides itself on its social security.

Technology based taxation to the rescue?

There are only two things that are certain and that is death and taxes. Although we live in an era where both are now up for debate, taxes historically have been a method to correct inequality and build our societies. 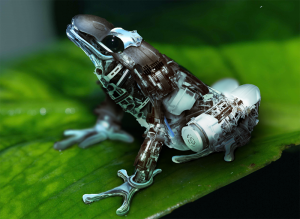 If we choose to stay in a capitalist system and look for increased productivity, the need for corrections to the system will grow as many will otherwise end up in a life not worthy of the twenty-first century. At the time of writing a proposition was put to the US congress to significantly increase taxation of corporations to fund public projects.

Once the robot revolution is in full effect – and this will very likely be with corporations first – the pressure for these corrections will only increase as many people will be driven towards unemployment significantly increasing the costs of social welfare.

One potential avenue policy makers can explore is the possibility of taxing organisations based on the number of robots companies operate. Yes, this means robots would need to be registered.

Alternatively, one could look into the ratio robots/humans in an organisation and link taxation levels with the following ratio’s: 30% people, 30% taxes.

Technology based taxation – a murky concept?

The problem with the above approach is obviously in the definition of both “robot” and “operational”. One doesn’t want to discourage the uptake of technology as an innovative tool either.

For instance, would you consider a 3D printer that is used once a week to be an operational robot? Does software constitute the kind of technology that should fall under the definition?

From our perspective, this question would open the need for an entire set of detailed regulations. At the core though, one question should frame the debate. Does the technology replace a human being for which the task that is executed is meaningful?

Alternatives to technology based taxation

The problem stays the same – how can we pay for a high-quality social security – but the answers can vary. From collectivizing robot resources to a basic income, all provide different takes to the answer. Or what if – just to tickle your brain – money was abolished completely.

We could solve the robots-taking-over-your-job problem. Yes, seriously! And the solution would make you happy too. Curious? Go check it out!