“Five years ago, the time wasn’t ripe for Roof Food”

The Board of Directors

Roof Food has been through a lot over the past five years. Fortunately, Sabien has been able to count on plenty of support from the board of directors, which also includes Alexander Naessens. Apart from being a founding partner, board member and a confidant, Alexander has been a believer from the very beginning. “Because I know Sabien so well, I know that she always does everything she can to move forward.

The fact that Alexander Naessens sits on the board of Roof Food is self-evident. Sabien and Alexander went to secondary school together, wrote a thesis on European monetary policy (even winning a prize for it) and started their professional career nine years ago at Delaware, the IT consultancy company, where Alexander is currently a manager. Even before Roof Food officially took off, Alexander co-authored the business plan. In addition to Sabien and Dany Neudt, he is a founding partner of Roof Food LLC, and so can be seen as a believer from the very beginning.

“For me, becoming co-founder of Roof Food was a logical step in my long friendship with Sabien. It was already clear during the writing of our thesis that we are a super good team. What’s more, it is very pleasant working with Sabien. I’m not such an enterprising type myself and would never dare to take the risks that Sabien does. However, through being on the board of directors, I can still experience everything up close and personal, which is very nice.”

Sabien: “It is naturally the task of the board of directors to be critical and to hold up a mirror to me and my ideas. Someone needs to keep an eye on the numbers and make sure that there is enough money in the account. I find that I do need something to motivate me. However, sometimes I had the feeling that the critical note prevailed over the constructive criticism and that I had to be accountable all the time. Maybe that’s just my personality or did I expect too much from the board of directors?

Alexander weighs in: “I understand that Sabien misses a certain form of confirmation from the board of directors. As board members, we first look at Roof Food as a company and only then do we look at Sabien as a person. In reality though, Roof Food is Sabien, and Sabien is Roof Food. This means that Sabien is the only variable that can change things and that puts a lot of pressure on her shoulders. Moreover, Sabien is extremely transparent, which is something that is certainly useful during a board of directors’ meeting.  It is normal that Sabien needs a sounding board as she has to make many big decisions on her own. However, sometimes it is counterproductive to share too many details and it is better to just talk about the big picture.”

Sabien: “Don’t get me wrong. I have already received a lot of support from the board. In the end, a lot of responsibilities are on me, and it reassures me to know that there is a board above me that bears some of the responsibility. Each of the members has an extensive network and an interesting perspective on things. I get a lot out of these one-to-one contacts. Dany Neudt, the chairman of the board of directors, is a confidant, as is Alexander. Dany has a great deal of experience in leading meetings, communicating clearly, making decisions quickly. Before each board meeting, I call him to go over the items on the agenda and discuss the essentials. By the way, it was Dany who acted as interim manager while I was on sick leave for a few months. On top of all that, he was Head of Cabinet of the City, so it couldn’t have been easy.

Alexander sees another reason why the meetings can be difficult sometimes: “Due to all kinds of circumstances, Roof Food has had an unstable past where different paths were taken, such as the roof dinners and the catering. Roof Food had to reorient itself each time something happened. As a result, the meetings were never simple. Every month, fundamental decisions had to be made which we, as board members, had to think about even though we had no experience in the catering industry. Moreover, it was often difficult, because Sabien consistently stuck to Roof Food’s mission and vision. That made things ultra-complex. For example, Sabien wanted to supply meals to companies, although not in disposable packaging, so a whole process had to be set up around sustainable packaging. If it was just about the money, we would have just used cardboard trays and we could be Deliveroo by now! However, Roof Food’s mission sometimes clashed with the commercial aspect and that led to difficult decisions for the board of directors. It does make sense, of course, for a board of directors to want to stabilise the company, and to help it evolve and grow.” The fact that the board members had no experience in the hospitality sector did not make things any easier. 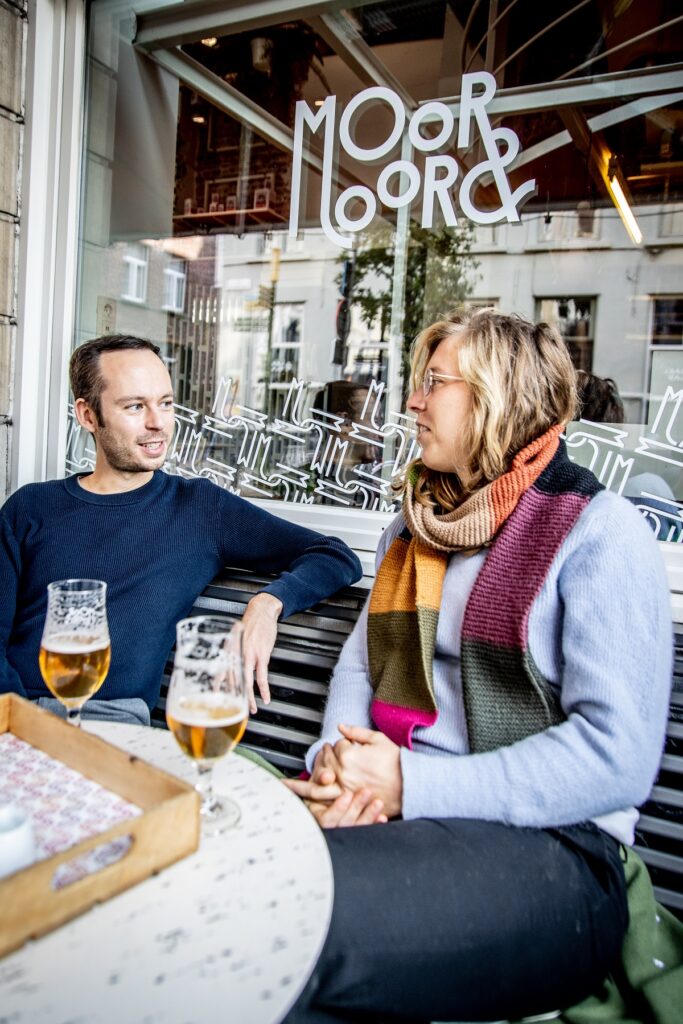 Sabien: “Catering in itself is a very specific sector with many challenges, yet a company that runs a rooftop vegetable garden and does catering is a completely different kettle of fish. There was no solid comparison material available anywhere. For example, it was very difficult to estimate what the construction of a roof vegetable garden would cost or how many daily specials we would sell each week. Would it be EUR 10, 50 or 500? It was so difficult to predict. We often lost time because I had to explain operational matters, such as how the kitchen was running, for example. Even though the board members often came up with very good ideas and advice, it usually led to a huge to-do list for me. In hindsight, we should have been assisted by experts in the field right from the start, because this is what we ended up doing with hospitality and marketing experts, Julie and Paquita.”

Sabien has recently started focusing on consultancy in roof vegetable gardens and things are going much more smoothly at the moment.

Sabien: “Since we stopped catering this spring, partly due to the coronavirus pandemic, we have not received a single catering request, although we have received five requests for a roof vegetable garden project. I think it’s awesome that you can turn your business around completely, from catering to consultancy, in such a short space of time. It can be said that Roof Food’s business model has changed, although its values and mission have remained unchanged, which is to make the city greener in its food production styles and to introduce people to healthy food. For me, this is verified by the fact that, unlike today, there was no market for roof vegetable gardens five years ago. I feel that the momentum is there now and that is important for an entrepreneur. Now that things are going better, the meetings with the board of directors will also be more stable and structured. It is no longer necessary to meet every month and discuss every EUR 5,000, for instance.

Alexander: “Although Sabien never wanted to be the manager of a catering company, it was not possible to do what we are doing today at that time. It is thanks to the experiences of the past few years that Sabien has become an expert. Those lessons have given her the knowledge and credibility to turn Roof Food into a stable and commercially successful company. In six months’ time she will have succeeded in realising four new roof vegetable gardens in the city, which shows that the mission and vision of Roof Food are being realised now more than ever. If we had started Roof Food today according to the initial business plan, we would definitely have succeeded. The time just wasn’t right (or ripe even) back then.