“We completely understand each other’s story. We complement each other.”

Sabien as a co-worker 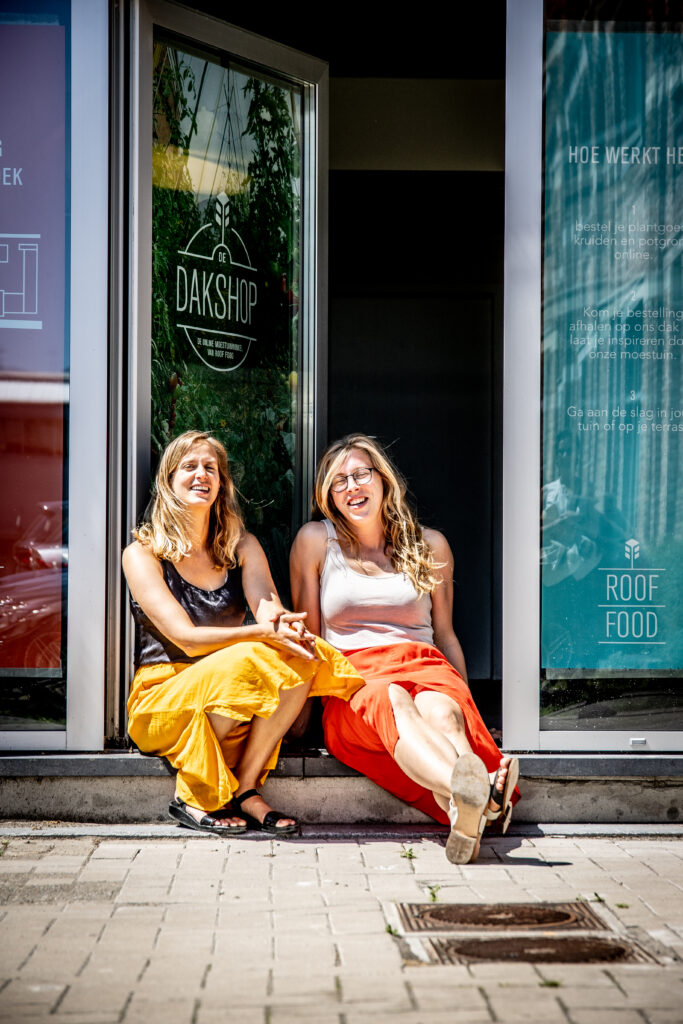 Sabien Windels and Marie Haspeslagh from the non-profit association (or vzw) Enchanté go a long way back. They have been work colleagues, friends, travel buddies and they are now co-workers again. They share a desk in the De Punt business centre overlooking the rooftop garden of Roof Food. As well as working hard, they also find time to go for a beer, have a chat or simply complain about life a little.

About three years ago, Marie was one of the founding members of the non-profit association, Enchanté, which was one of the citizens’ initiatives rewarded by the City of Ghent with a subsidy. “The non-profit association Enchanté is a network of friendly traders and citizens who offer small services free of charge to people in vulnerable situations. These services range from hairdressers and bakers to cafés and DIY shops that open their doors to people, where they can drink a glass of water, store their backpack, charge their mobile phone, go to the toilet and so on,” says Marie.

“In addition, there is also a ‘pay it forward’ system where customers pay for an extra coffee, drink or a meal, so the trader can give it to whoever asks for it.” A similar initiative already existed in Paris, and together with seven socially-committed fellow citizens, we decided to roll it out in Ghent as well. It is our intention to help vulnerable people and to invite them to places in the city where they would otherwise not come anymore. The network for supporting vulnerable people usually limits itself to helping organisations, walk-in shelters, or places for people with an addiction. We want to offer an alternative.”

Enchanté vzw currently has two full-time employees and also started in De Punt, in the same office as Roof Food. “By the way, I also worked for Roof Food,” says Marie. “I was co-responsible for sales, marketing, roof dinners and workshops. I was a real jack of all trades. Sabien and I know each other very well. The great thing is that, when we’re at work, we really manage to focus solely on our work. Although we have the occasional chat, we each do our best to let the other one focus on their work. After work, we sometimes have a beer on the roof, where we turn off our work mode and talk about other things, such as our summer trip together, for example. I think that we can make that switch between private and professional topics very well.”

“Yes, that’s right,” agrees Sabien. “When we’re at De Punt, we talk almost exclusively about work, although there are occasions when we agree with each other that it’s time to switch to the role of friends again!” 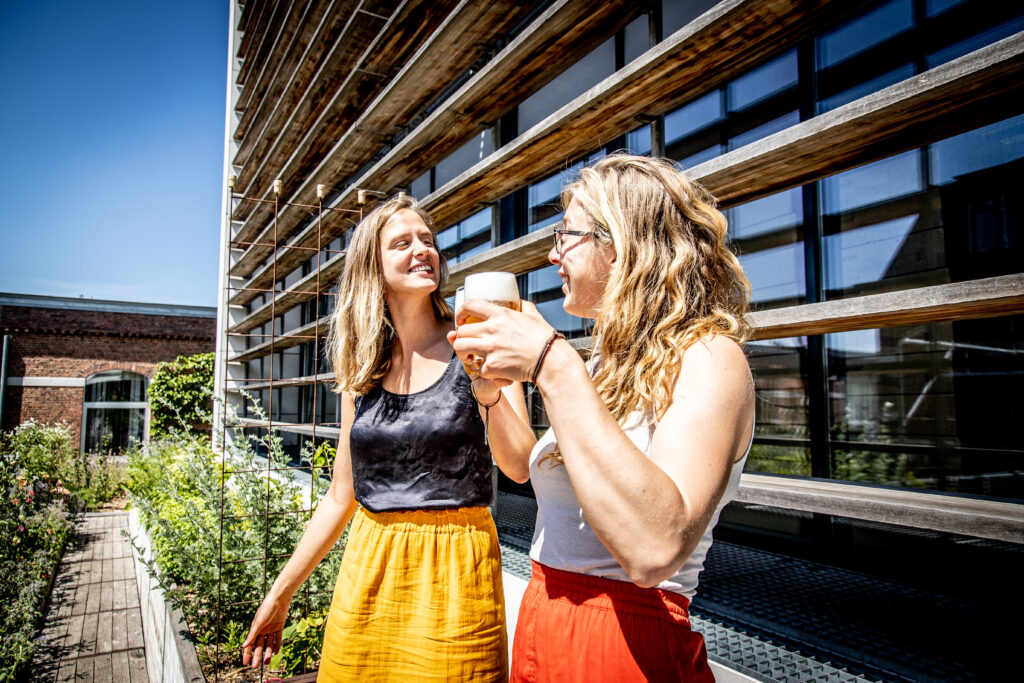 Marie (teasingly): “…or if you have a new MacBook Air and you don’t know how to use it!”

Sabien (chuckles): “That too!” 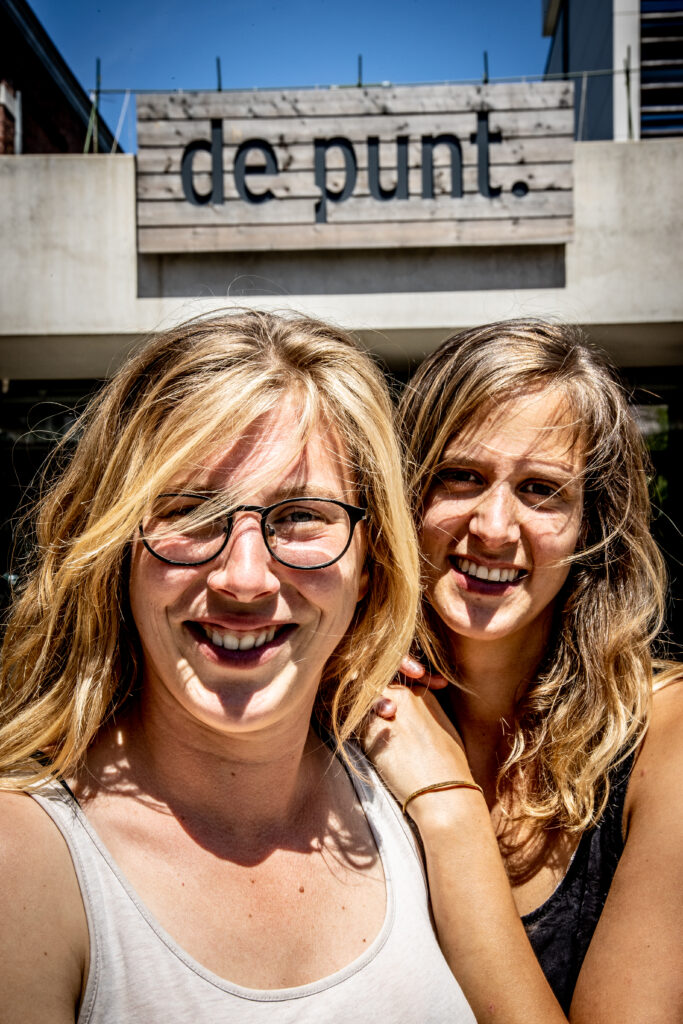 Marie: “As an organisation, you go through new phases all the time. With us, these phases overlap occasionally, so we can learn a lot from each other. We can check things with each other, ask for advice or just vent a little! After all, it’s not always easy to take the final responsibility for a project every day. When it’s busy, when you’re having a bad day, or if a decision doesn’t turn out well, it’s reassuring to know that there’s someone else who’s going through the same challenges as you.”

Sabien (laughs): “Yes, we are each other’s pillar for complaints. In our office, there’s a seat which is called the complaining seat, where we can let ourselves go completely! That’s not always possible between friends. Sometimes, I even find it annoying when friends ask me how things are going with Roof Food. I don’t always feel like chatting about it. Marie and I completely understand each other’s story. We complement each other.”

Marie (laughs): “That’s right! Last year, we were both waiting for a grant that could mean a lot for the individual futures of our organisations. When it turned out that we both got them, we started celebrating with cava and crisps, because even though we have two different organisations, we each understand what the other one is going through. What’s more, the fact that we’re both social entrepreneurs, reinforces that. Friends who have a regular job don’t always understand our specific issues, and they often have very different challenges”.