You use it on a daily basis. Today in many ways it sets the difference between a life of struggle and a life of joy and abundance. And yet, very few people think about the function of money, let alone how it comes into existence.

Unlike natural resources which today are still limited in supply, money is a human invention with potential unlimited availability.

As a consequence, we are free to determine how much money exists, who receives it, who makes it and what it means to us.

Money and our entire monetary system is a convention.

How is money created today?

Asking this question is actually asking the wrong question. Money in its generic form doesn’t really exist, only currencies do.

The number of currencies is unknown as a group of people as small as two persons could come up with their own currency and consider it a valid method of payment amongst each other. With the rise of internet technology, virtual currencies like Bitcoin are coming and going.

The importance of a currency is hence the number of people willing to accept it and which authority they attribute to the currency.

For the sake of this article, we will not look into the private or alternative currency systems as a wide array of systems exists, ranging from ‘mining’ for bitcoins, basically solving complex math problems, to time based currencies who just use time as a unit of currency: one hour of work is one credit.

How are currencies that hold legal tender created today?

You might think of coins minted and bank notes printed when you think of money that is created by the government. After all, that is what people use on an everyday basis to purchase goods and services.

You might even think money electronically available in your bank accounts is the number of those coins and notes that the bank holds for you.

The reality is different. For instance, in the UK , only 3% of our entire money supply – the total amount of money in circulation – is coins and bank notes. The other 97% is created by the banking system in the form of debt. These percentages are common because of the nature of the system that is used.

When a bank makes a loan – for example to a person looking for a mortgage to buy a house – it does not give that person the amount of money in cash. Instead, the bank adds the number into a computer and the amount shows up in that person’s bank account. In effect, new money was created.

If the person uses the deposit (for instance to buy a house) and transfers this money to the bank account of the seller, the bank of the seller can lend out a percentage of that amount. Meaning that from the initial loan banks can create new loans. This is called fractional reserve banking.

The percentage is determined by the required reserve ratio, basically a percentage of money banks need to keep ‘in-house’. That percentage determines how much extra money can be created.

A simple table shows to illustrate how loans are leverage to create new money. Let us apply a reserve ratio of 20%.

It would take 82 of these transactions to reach the maximum of money that can be created, being 500.000. An easy formula can be applied to calculate the money creation power. Take the amount of the initial loan (100.000) and multiply it with the number you get when dividing one with the required reserve ratio (1/20% = 5)

In case you are curious what the required reserve percentage is… it varies wildly: Western countries such as Australia and Canada do not have any reserve, the EU has a reserve requirement of 1%, the US an average of 3.1%.

With the fast growing economies, Russia trails with a 4%, Brazil leads with a reserve requirement of 20%, closely followed by China which set the reserve at 18.5%

On a technical level much can be said about the value and the disadvantages of this system. Depending which perspective you take, you may consider this system to create instability or growth.

The more fundamental question to ask though is who is entitled to create money, not only coins and notes but also, and especially, the digital form of money.

In the fractional banking system as described above, the control of ‘digital money’ is primarily placed with two parties: the central bank committee who decides on the money creation policies and the commercial banks who are able to create money via the practice of lending, limited by the reserve ratio.

There are two points of attention to consider: first, the monetary policies coming out of the central bank are put in place by people who have not been publicly mandated.

It would be too easy to label this choice as an outrage. It is a system that has brought us forward, albeit with many flaws and inequalities.

That being said, the question that arises, can we improve it?

The main advantage is clear: policy and money creation are in the same hands. Apart from an increased democratic legitimacy, there is also increased accountability for the actions of politicians who cannot hide behind ‘the markets’.

This shift would also reinstate power from those markets to the actual policy makers. Too often, politicians are impacted by financial markets and private interests in their policy decisions. Bringing the money creation into the hands of a government would put politicians back in control.

The pitfall and its solutions

Of course, there also lies the potential pitfall. Democracy is not always leading to the most optimal results, Hitler was elected democratically.

What if an elected government would abuse their power to create money? This would both have domestic and international impact.

Solutions to prevent this do exist:

What happens with the bankers? 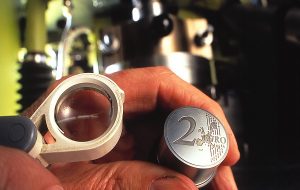 In a sovereign money creation system, commercial banks would lose their possibility to create money through loans.

Does this mean commercial banking is dead and bankers cannot earn any money?

Financial markets and financial products would still be there for banks to profit from.

Governments could fiscally or financially reward commercial bankers for acting in a way that supports the policy goals set, aligning the public good with private interests.

In short, there are plenty of ways to ensure commercial banks can thrive under a sovereign money creation system. Obviously this approach focuses solely on the economic dimension.

Where are we today?

Public support for the idea of sovereign money creation is growing, even from people intimate with the existing system.

More importantly, the government of Iceland has effectively put up a legal bill to end the current system where private banks create money via loans and transfer all money creation authority back to the Icelandic central bank.

Opposition to the idea exists as well. The main objection that less credit would hinder innovation and growth.

Breaking it down to its essence

In conclusion, let’s take a step back from the technicality of the system.

The central question one needs to ask is not a question of money creation. Rather it is which society do we want and to whom do we give control to create it.

And even more important, do we need debt to innovate?

Do you want it to be a private system or a publicly controlled system?

Do you prefer an elected government or a non elected body of experts to be in control? Or maybe both?

Money today is the fuel of our societal progress. At this time in history, it is too important not to care…