Dress to Impress with Smart Clothing

The purpose of clothing in our civilisation has evolved throughout the centuries from being strictly functional, such as keeping us warm or protecting us from the sun, to being an aesthetic or social class statement which helps us to look cool or identify ourselves with a specific current trend.

While all these uses of clothing are still valid and certainly accepted by everyone, we are now living in an era where they are just no longer sufficient as they seem to be too ‘single-purposed’! There is clearly much more that can be done with a few metres of textile or with the jewels and accessories that are constantly attached to our bodies. All it takes is just a few drops of science!

The study of this phenomenon of relationships between fashion and technology has many names ranging from e-textiles or smart fabrics to wearable technologies, intelligent clothing or high-tech fashion. We chose to encompass them all under the term ‘smart clothing‘ in this article, although we can see that many researchers increasingly prefer to use the term “wearables”.

What You Already Know

Leaving aside the gadgets that you’ve seen in the James Bond movies (which actually seem to be quite feasible and rather common sense nowadays), maybe one of the oldest wearables with which you are certainly familiar is your electronic watch from the early nineties that also had a calculator. This is an example of how we knew more could be done with the things we wear. Similarly, the fluorescent fabric used in the reflective vests or the waterproof textiles used in winter-sports are examples of the mix between textile industry and science.

The evolution of digital technologies and especially the individualisation and accessibility given to them through smart devices allowed many great ideas to flourish in the past decade , such as Bluetooth headsets mounted on fine earrings, helmets or headbands, USB heated gloves and socks or even the so-called ‘Spy TIE’ which has a tiny colour camera sewed in.

If I had to categorise the work that is currently being done in this field and the multitude of invented products, I would split them into five main areas, based on their purpose. I have listed some examples for each of them below. 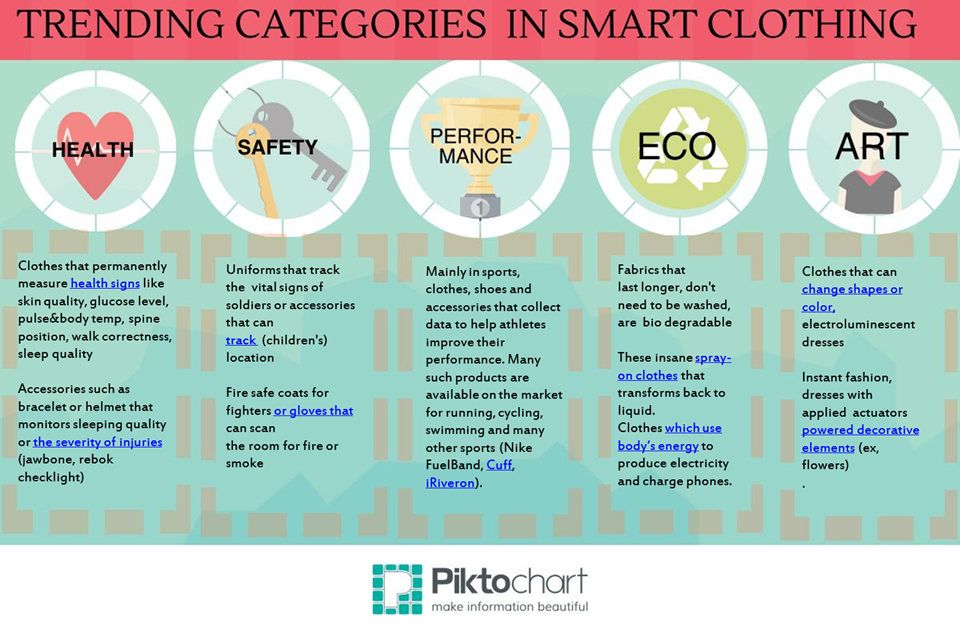 Like everything that’s new, smart clothing also attracts a series of concerns for many people. Although most of these concerns have not yet been scientifically or statistically analysed, they do generate many discussions in the media.

The most common discussions refer to:

There are also further sociological and anthropological considerations, more linked to the evolution towards a cyborg-like human. While all these will continue to be subjects of debate, I personally know that I will be very happy to hear my mirror telling me when I leave home “Oh, that’s a great choice of sweater, it’ll keep you warm! However, you’ve forgotten your matching glucose-monitoring earrings!”

Those of you interested can join one of the many conferences happening in various locations this year, such as the Wearable Technology Show in London during March or the WATCH Conference, specialising in the interaction between wearables and health in Amsterdam during May.

I have to go now. My activity monitoring bracelet says that I’ve been sitting down for too long…