“Pioneering is not easy, but Sabien knows how to do it”

Sabien as a girlfriend

“On good days, she flies. Then she can take on the whole world. That’s incredibly beautiful to see,” says Thomas Van Lierde (41), who has been Sabien’s (31) boyfriend for almost six years. Thomas was closely involved with Roof Food from the start, although he consciously took a step aside last year. “I interfered too much. These days, I mainly help Sabien by cooking, listening and putting everything into perspective.”

“…on the most beautiful boat in the Handelsdok,” Sabien laughs as she explains where she lives. Together with Thomas, she started a fantastic houseboat adventure five years ago. “We met each other at a cafe on New Year’s Eve, 2014, and it was instant love. During our first summer together, Thomas proposed that we sail to Wallonia on ‘Beppie’, a small old boat, similar to a floating caravan. I thought it would be boring, sailing for three weeks at eight kilometres per hour, but it turned out to be one big adventure. Throughout that trip, we fantasised about living on a houseboat. Two months later, this beauty was ours.”

“Living on a houseboat has made our relationship grow strong.” 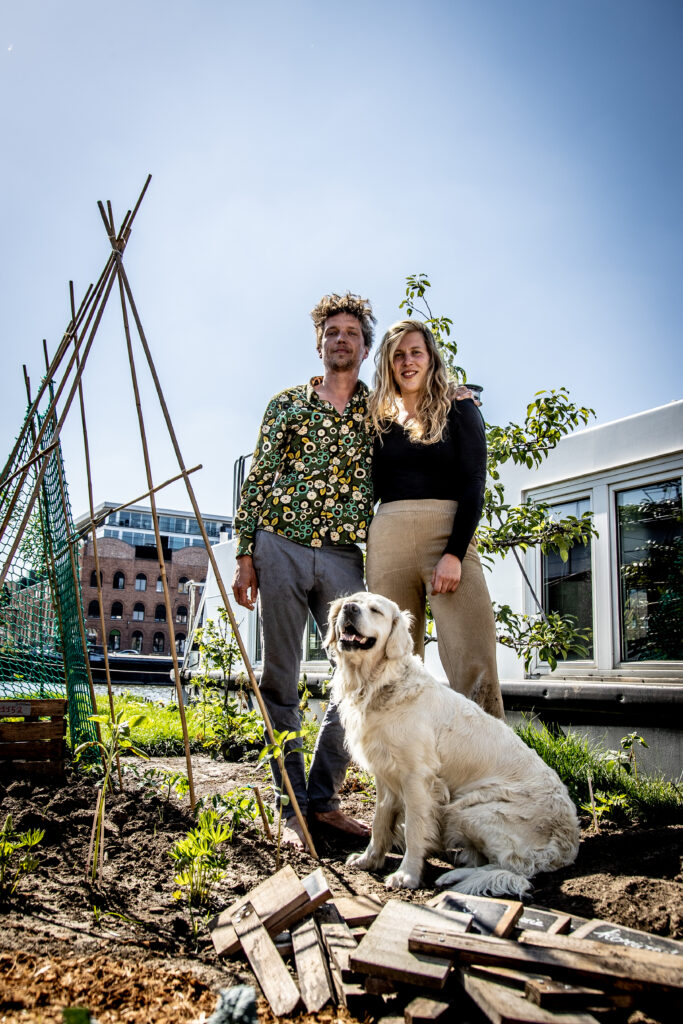 “When I met Sabien,” says Thomas, “I mainly worked in Paris. While I was there, I sold vintage furniture for catering establishments. I had a very busy life with a lot of commuting and adrenaline-rushing. I had never lived with a woman, nor had I ever left Antwerp, the place where my heart belonged.

However, starting this water adventure together with Sabien felt good. Once I’m on the water, I can leave everything behind me. Whether you’re in Paris, Amsterdam or Ghent, the water is an oasis of tranquillity amidst the city bustle. That’s done our relationship a power of good.”

Sabien agrees: “Our joint mission was to make a success of this houseboat project. In the first year, we roamed around like nomads. Every two months, we moved on to another place. That was quite intense. We had no domicile, nor connections to either water or electricity. We often had to turn to other houseboat dwellers for help and advice.

All that made our relationship very strong. When we managed to get a permanent berth here at the Handelsdok, we created a new world for ourselves, gaining many friends. Living here makes perfect sense for us. This boat is our home and where we can completely unwind. If we ever exchange the boat, it will be for a farm or a large piece of land with a small cabin in a forest. We sometimes fantasise about that.”

Almost at the same time as the houseboat adventure, Sabien also started her personal adventure with the founding of Roof Food. Thomas has been closely involved with the roof vegetable garden from the beginning. “The start of Roof Food really was rock ‘n’ roll. Everything was new: building a roof garden for the first time, moving from one roof to another, installing a kitchen and participating in trade fairs. I was mainly concerned with the logistics and the technical side.”

“Sabien and I are both entrepreneurs, but sometimes we each have a different vision. That’s why I consciously distance myself from Roof Food.” 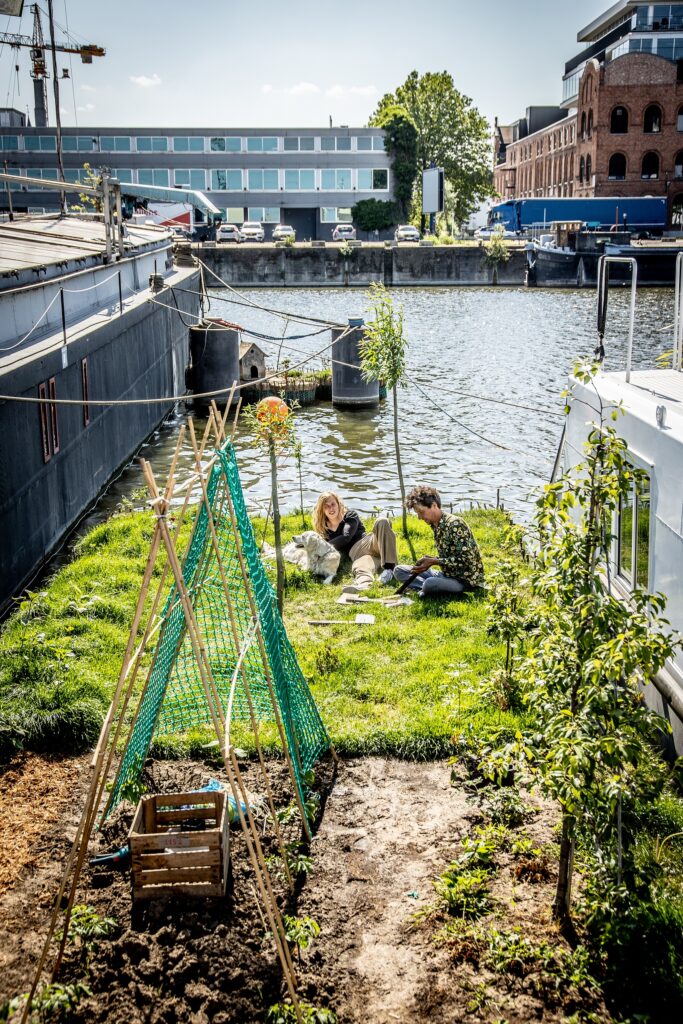 In the last year, Thomas has indeed distanced himself from Roof Food. “I became too invested in the project. As an entrepreneur I have my own vision, but that doesn’t always correspond with Sabien’s vision. Sometimes I gave advice while Sabien didn’t need it as she just wanted me to listen without saying anything. That’s not easy when you’re emotionally close to something and that caused some friction in our relationship. That’s why it’s better that I’m less involved with Roof Food. We do reflect together all the time, but in the field, my share is smaller now. We don’t want to become a couple that doesn’t have anything else to talk about other than work.”

Being known as ‘The boyfriend of…’

Two years ago, Thomas decided to put an end to his successful career as a dealer in vintage furniture. He sold his shop in Paris and has been a househusband ever since. “For a moment, I had a hard time with it. I thought, ‘Is this it? Am I just a househusband now? As it happens, I’m at peace. In Paris, I was a rock star; here I am a noble stranger…or ’The boyfriend of’.

Now, I’m enjoying standing in the shadows. I like to see Sabien on the stage, to see how she goes for her dreams, just like I did back then. On good days, she flies, and then she can take on the whole world. That’s incredibly beautiful to see. On lesser days, well, I have a hard time myself. I want to help her too much, even though I can’t always help her. I don’t give suggestions anymore, but I do listen and cook for her.”

“Thomas is a mirror to me and helps me to put everything into perspective.” 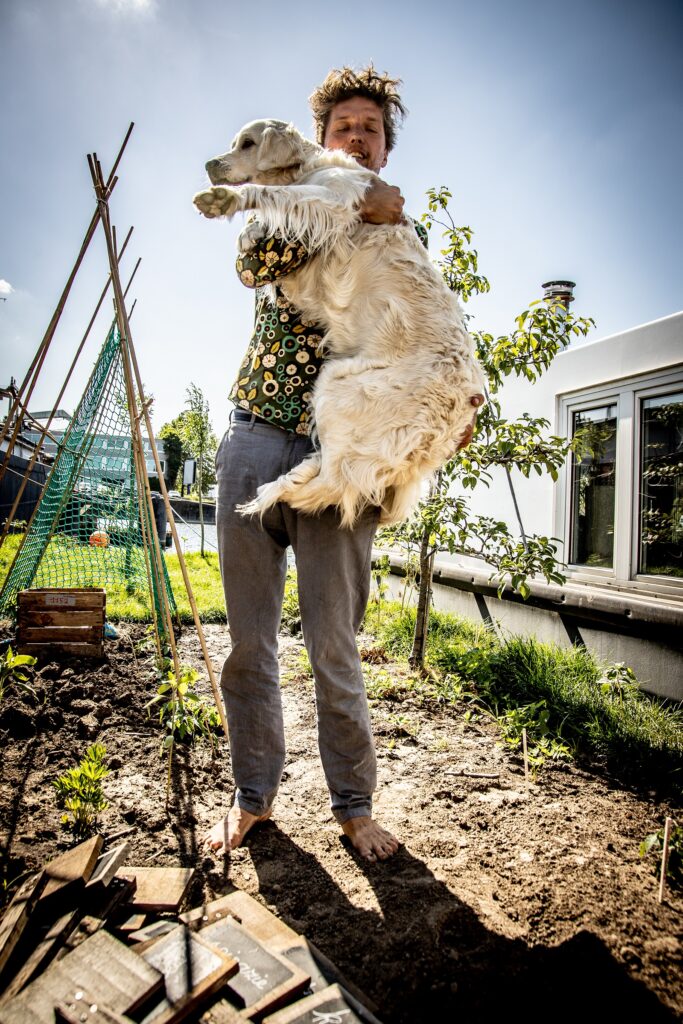 “In the period when things didn’t go so well with Roof Food and with me, Thomas helped me incredibly. I relied on Thomas a lot then. He always listened to me, comforted me and helped me. Thomas is a mirror to me: when I see how much time he has to enjoy life I remember that that’s what I want too. He helps me to put everything into perspective. Roof Food is just one dimension in my life.”

“I could never have done it if I had been in Sabien’s shoes, not at all. The resilience Sabien has is unbelievable. Every time she keeps getting slapped, she still keeps on going. I would have already made the wrong decisions or made irreparable fractures. Pioneering isn’t easy, yet Sabien knows how to do it.”

Clever and cunning, cunning and clever

Thomas adds, “Sabien and I are very complementary. Sabien thinks in a completely different way to what I do; she’s more academic and more future-oriented. She wants to inspire people, and to improve the world. With my background as a small self-employed person, all I think about is making quick money (laughs). I’m more cunning than smart and Sabien is more smart than cunning (laughs). That’s the biggest difference between us.”

“The difference in our approaches is well-reflected in the way we play board games,” says Sabien. “When we play a new game, I will always win the first few rounds because I’m always thinking of new strategies. Thomas, on the other hand, just optimises his approach step-by-step until I can’t beat him anymore.”

Does that mean that Thomas is also more successful in real life? Thomas says “Financially, perhaps I am, yes. Making money requires a certain repetition and that interests me more than it does Sabien. Every year, Sabien comes up with a new idea for Roof Food, while every year I start from the same idea, improve it a bit just to get ahead of the competition. Sabien, on the other hand, just inspires the competition.” 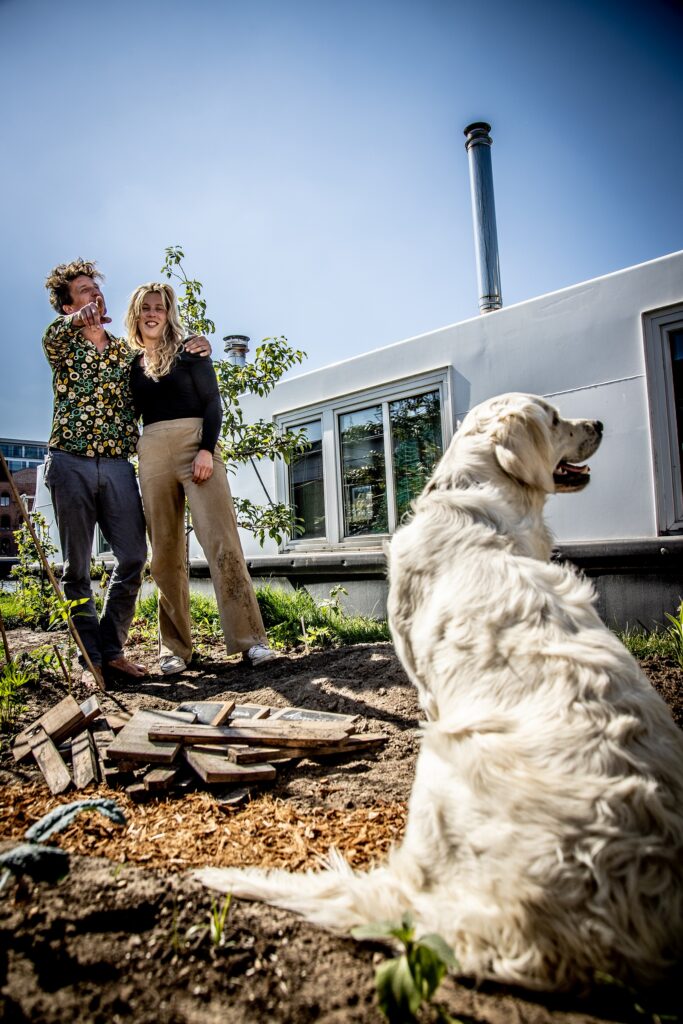 Sabien says, “If we could do something together, we could achieve something fantastic. Thomas really has a nose for business. That’s his talent. In the period when things didn’t go so well with Roof Food, I thought a few times: ‘That’s it, I’m quitting! Let’s start something new together, yet in the end I still want to do my own thing. Moreover, as a couple, you also want to be in a love affair as well as doing business together, and that’s pretty tough. Saying that, what we have achieved together with our boat, for example: completely refurbished it ourselves, got a good berth and built a floating garden. I’m very proud of that, and so, as a team, we are really pleased with ourselves.”

The idea of doing business together is never far away. At the moment, Thomas is in the running for being the concession holder of a new marina a little further down the road. “I haven’t quite decided yet. I am very happy with how my life is at the moment. Do I want to change that? Anyway, I only want to take that on if I can put my own mark on the marina. One condition I have, for example, is that I must be allowed to create a large floating garden there. We have just built a prototype next to our boat, which makes it unique in Belgium. I secretly hope that Sabien will participate in my plans after all, even if it’s just a clearly defined task or maybe as a minority shareholder.”

Sabien agrees, “It’s an option, right? Anyway, I’ll be involved somehow. We often have brainstorming sessions about it together. However, at the moment, there are so many opportunities for Roof Food to grow further and I want to concentrate on that. Just as Thomas supports me with Roof Food – from a distance and from his vision – so I want to support him with his marina project. If we can both shine in this way, that’s perfect for me.”